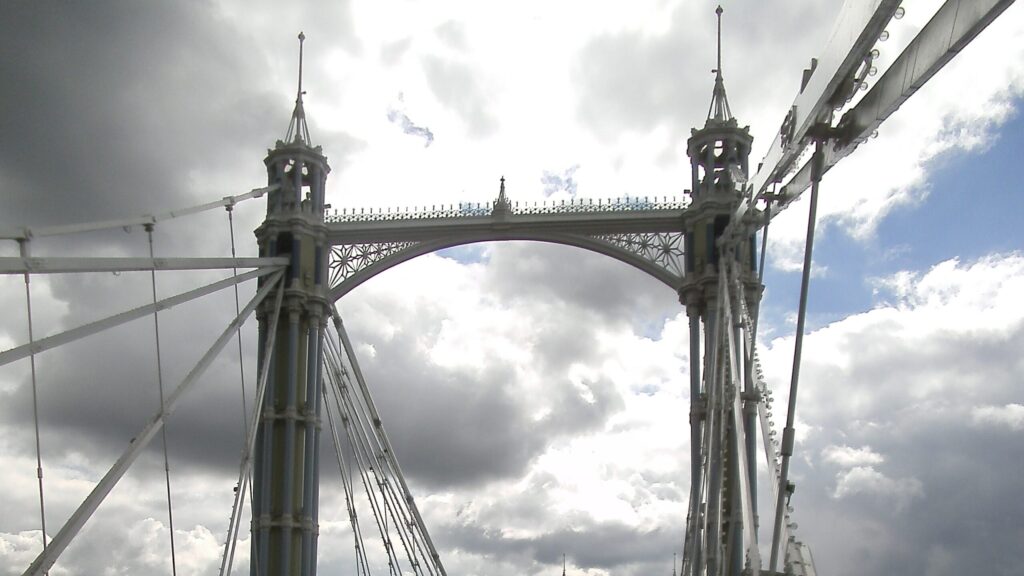 I hope that you have seen or one day will see Albert Bridge in London. The bridge connects Chelsea with Battersea and is much underestimated in its beauty. A curious hybrid between cable-stayed, beam and suspension bridge, it has elegantly ornate pillars of pale green, blue and white. The bridge itself is a pale coral colour, held up by four white cables on either side of each pillar. Unlike any other bridge in London, Albert Bridge retains its quaint octagonal tollbooths to this day. As if this weren’t strange enough yet, it also sports signs asking troops to break step when crossing to avoid it collapsing. Its vibrant nature had already earned it the nickname ‘The Trembling Lady’ the previous century. It is really a poetic construction, despite the concrete piers that had to be added in 1973, exactly one hundred years after its opening.

Much like Arthur Conan Doyle crouched over the maps of London in his post office in Edinburgh, I squinted at Google maps about every four sentences when I wrote my novel. I was very keen to recreate the detail descriptions of the city and the routes the characters were taking to give people who knew London the chance to revisit it in my story, just like they had in Conan Doyle’s. Besides, facts need to be correct in a Sherlock Holmes novel, am I right?

Unfortunately, like Conan Doyle, I couldn’t just walk over to the bridge and see if I was describing it correctly, top to bottom. Bottom mainly, as Sherlock and John find themselves below the bridge in the scene in question. Luckily, Albert Bridge is one of the few bridges that spans some soil at its southern end if the Thames isn’t too high. This was where Sherlock and John – and my strangely familiar new character Scarlett – are hiding after one of those chase scenes Sherlock enjoys so much. You see, it all works with the plot.

When I finally got to see Albert Bridge, though, on my first day in London, I was surprised just how beautiful it really was. It was almost strange that people would have bothered making a pretty crossing over the river that boasted Tower Bridge not far away. We arrived at the Chelsea Embankment around the late afternoon of a Tuesday. The sun had just retreated behind some storm grey clouds and I took out my camera as soon as I saw Albert Bridge. I could hardly believe it was all really there – after all it was just as much a character in my books as Sherlock Holmes. I make a habit of giving the setting a personality, mainly because it appears to me like a person with features and whims, but also because I just fancy personifications of all kinds – chapeau to Scott Fitzgerald for instilling this fancy in me.

Back to the stormy clouds and pastel coloured Albert Bridge, though. It looked beautiful even in front of a similar background, or at least I thought so. My camera didn’t. That’s the trouble when things have a personality: they might disagree. So, here I am, frantically trying to snap this cherished location before dark to improve my descriptions of it later while my camera had simply decided it was unable to focus, because in its mind, everything was white and there was nothing to be focussed on. We all have days like this, but please don’t make that my first day in London?

Now if you know Albert Bridge, you will know what happened next, but for the sake of those who don’t I will explain it nonetheless. It noticed my struggle, took pity on me and lit up. Albert Bridge is illuminated by 4,000 bulbs every night. They run along the bridge and pillars, but also all the way across each of the cables. It is really a magnificent view. I was so grateful. Below is the photo I could finally take.

This wasn’t just my first time on location in my novel, however, but the beginning of a series of kind gestures London offered me, and I haven’t forgotten a single one of them since.

Find Me and Spiral Mind